Farming While Black: Soul Fire Farm’s Practical Guide to Liberation on the Land 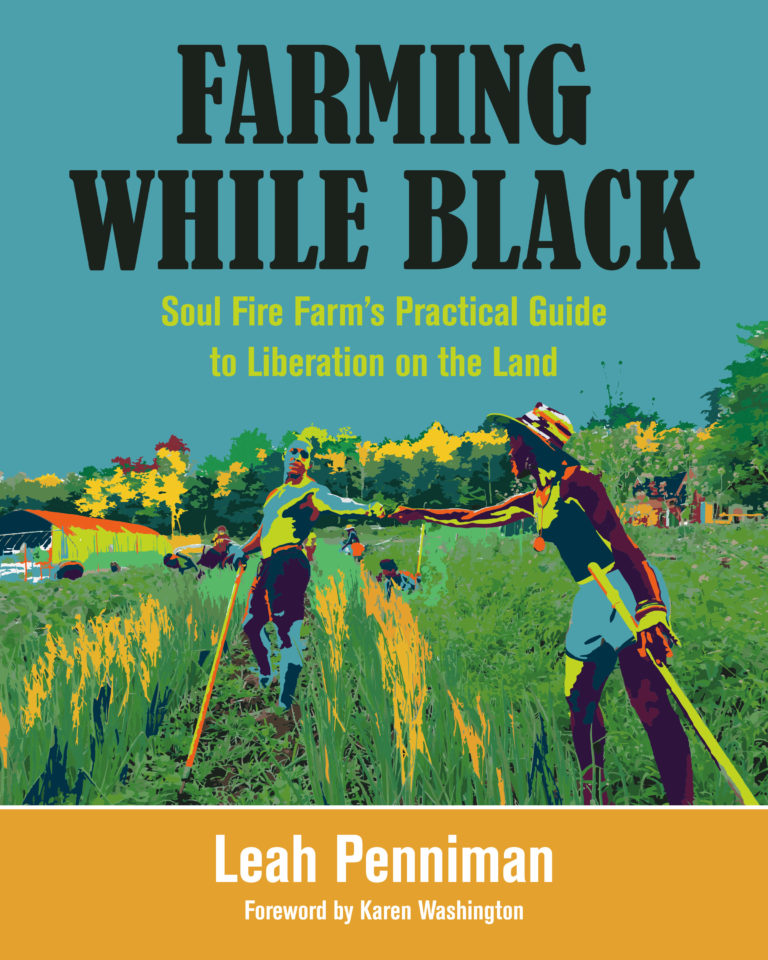 “Carrying on the legacy of our ancestral grandmothers, who braided seeds in their hair before boarding transatlantic slave ships, believing against odds in a future of sovereignty on land.”

This timely book is Soul Fire Farm’s Practical Guide to Liberation on the Land. As Karen Washington says in the foreword, it “sheds light on the richness of Black Culture permeating throughout agriculture.” It’s practical, political, spiritual, uplifting and inspiring.

Before I go any further, I should say I’m white. I’m a farmer, a first generation immigrant, an enthusiastic reader of good farming books, and someone who likes to pass things she learns on to others. I love that this book brings farming wisdom from African and Caribbean cultures, gems like information on the susu Caribbean community mutual lending groups and inventive methods of farming with small material resources. I love that this book opens our eyes wider to the historical and current, shamefully unjust treatment of people of color as they farm. The title is perfect.

Leah Penniman is a Black Kreyol farmer who has been working as a farmer for 20 years and as an anti-racist food activist for 15 years, and a mother for some years too. She is a founder of the ten-person Soul Fire Farm in New York, which supplies low-cost healthy food to people living in places where they would otherwise be without good food. The farm offers training programs to Black, Latinx and Indigenous new farmers, as well as Black youth who would otherwise have received punitive court sentences, and anti-racism workshops.

Throughout the book are sidebars with the title “Uplift”, bringing wisdom from the African Diaspora. There are also tales from her own learning curve, such as letting the excitement over finding land blind her to the impoverished nature of the soil there, and the lack of road, electricity or even a house. She passes on to us her 13-point list of characteristics of suitable land, and her three essentials for farming: land, training and material resources. She knows the conventional resources, the unconventional ones, and how to tap into them. For instance, squatting land and activating an adverse possession claim after paying taxes for enough years, or making use of the National Incubator Farm Training Initiative programs.

As a result of decades of USDA discrimination and white injustice, the percentage of farms owned by Black farmers in the US has gone down from 14% in 1920 to less than 2% today. USDA is starting to make amends by offering some greater resources to “historically disadvantaged” farmers. There is a long way to go, to undo past harm. Land injustice continues today. Over 80% of food eaten in the US is grown by Latinx workers, but only 2% of farm managers are Latinx. A bright spot during the Great Depression was the formation of the Southern Tenant Farmers Union, an interracial organization that used nonviolent protest to demand their fair share of government support.

The Uplift sidebar about the New Communities Land Trust particularly interested me. This, the first community land trust in the US, was set up in 1969 as a 5,700 acre farm collective owned in common by Black farmers. Yes, they were shot at by some white neighbors, and suffered thefts. They were denied emergency drought relief in 1981-82, while white farmers received funds. In 1985 they had to fold and sell the land. In 1999 they settled a civil rights case for $1.2 billion and re-established on a 1,600 acre former plantation, renamed Resora.

This book contains many useful resources I have not found in such concentration elsewhere! Contact lists for farm training programs, and in particular, ones led by people of color, with an awareness of the political implications of white-led programs that ask people to work for no pay, doing work that benefits the landowner. She tells of some specific acts of reparation where a European-descent person with means transferred a portion of their land to the descendants of those who created the wealth. She encourages people of color to be specific in asking for reparations, suggesting “If you want advice, ask for money. If you want money, ask for advice.”

When it comes to asking for loans, many Black people do not have access to conventional credit because of the legacy of structural racism. Alternative resources such as susu are needed. These are microfinance membership groups that pool subscriptions and fund one member at a time. Leah Penniman offers models of financial sustainability that question capitalism and reinforce the understanding that land has belonged to people in common for much longer than it has been owned privately. Those who have known want don’t assume that the world owes them/us anything, and so will want to pay close attention to financial agreements.

Sharing work via the konbit system is another way for people to support each other to get timely tasks completed. Every farm gets the chance to receive the help as well as provide it. This book provides a great deal of help. In return, don’t look for the cheapest place to buy it! Pay the fair price, or even offer reparations if you are from a family that benefitted from historical exploitation of people of color.

The book offers help with clarifying your mission and goals, and making a farm business plan. Soul Fire’s goals include training and empowering aspiring Black, Latinx and Indigenous growers and young people, providing healing, offering education in environmental justice, food sovereignty and other transformative justice, supplying good food locally at affordable prices, sharing their farming model, collaborating with other Black land justice networks and being a culture that cares for the well-being of its workers.