USDA is facing a legal challenge over its new GMO labeling standards.

The Biden administration’s efforts to correct historic wrongs are being contested by white farmers and banks. Congress might have a path forward.

In the cutthroat world of beef, the well-established Easterday ranching family in Washington gambled it all away.

On Henry’s Farm, Experimenting with Radical Adaptation to the Climate Crisis

For the past 25 years, Illinois organic farmer Henry Brockman has observed the impact of climate change on his farm. He’s now trying to save it, and its legacy.

On Henry’s Farm, Experimenting with Radical Adaptation to the Climate Crisis

An Inside Look at Union Organizing in the Fast Food Industry

A protest at a New York City Chipotle illustrates the challenges and potential of workers fighting for better pay and working conditions.

Mapping the Money:  An Analysis of Spending under the Conservation Stewardship Program

USDA supports farmers, ranchers, and landowners in preserving natural resources, including through two major working lands conservation programs are the Conservation Stewardship Program (CSP) and the Environmental Quality Incentives Program (EQIP). Center for Rural Affairs has produced a report about amount of and trend in CSP funding since its establishment in 2008.

Producers and Private Landowners, Partnering with NRCS, Meet Nearly Half of Bog Turtle Habitat Recovery Goals Ahead of 2050

Young Farmers Are Locked Out of the System, and the Asset Economy Is to Blame     Behind the farm succession crisis stands rising asset prices from real estate to retirement funds, which have remade the global economy over the past 50 years.

Op-Ed: Young Farmers Are Locked Out of the System, and the Asset Economy Is to Blame

Through a unique collaboration with USDA’s Office of Urban Agriculture and Innovative Production, food leftovers from six district schools in Prince William County, Virginia, are now being sorted, bagged and collected before being mixed with organic yard waste and processed into compost at the county’s recycling center. In the first six weeks of the program, almost eight tons of food scraps have been recycled rather than buried in the county landfill. 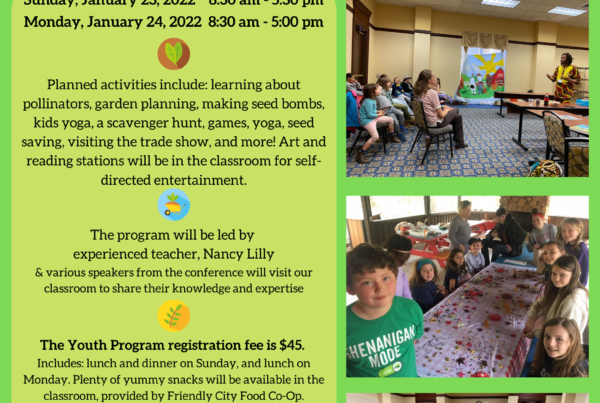 Youth Program at the Conference

Our Keynote Speakers for the Conference (in one we

Pam Dawling is the author of two books: Sustainabl

Our next featured speaker is Michael Carter, Jr. o

Here are the different tracks you may follow at th

Ira Wallace is the amazing and inspiring organic g

Is one of your New Years Dedications to learn more

We're getting excited and hope you are too! 🌱Jo